This entry is part of a special series of blog posts about the UN’s Committee on World Food Security (CFS) – The Future of the CFS?: Collectively reflecting on the directions of UN’s most inclusive body. Read more about this project here.

Last week, Josh’s contribution focused on how broader aspects of discourse and framings influence CFS debate. This week, we will discuss more specific aspects related to the negotiation process. Certain details can actually mean a lot for a key function of the CFS: to develop and endorse policy recommendations and guidelines on a range of food security and nutrition topics.

Since its reform, CFS’ Annual Sessions have included negotiations on the final policy text to be endorsed in Plenary by the Committee – that is, during that key week in October where all members and participants meet. This year, all the negotiations were completed before the Annual Session.

What are the implications of this change?

In what follows, we discuss some reflections on opportunities and risks.

Before that, let’s briefly review how the CFS has functioned as a policy body. If you already know the standard CFS negotiation process, you can jump directly to Potential Limitations below.

One of the primary roles of the CFS is to

“[p]romote greater policy convergence and coordination, including through the development of international strategies and voluntary guidelines …” (CFS 2009:para 5.2).

After the reform, policy roundtables were established to support these aims. It generally works as follows, as also illustrated in the graphic below: 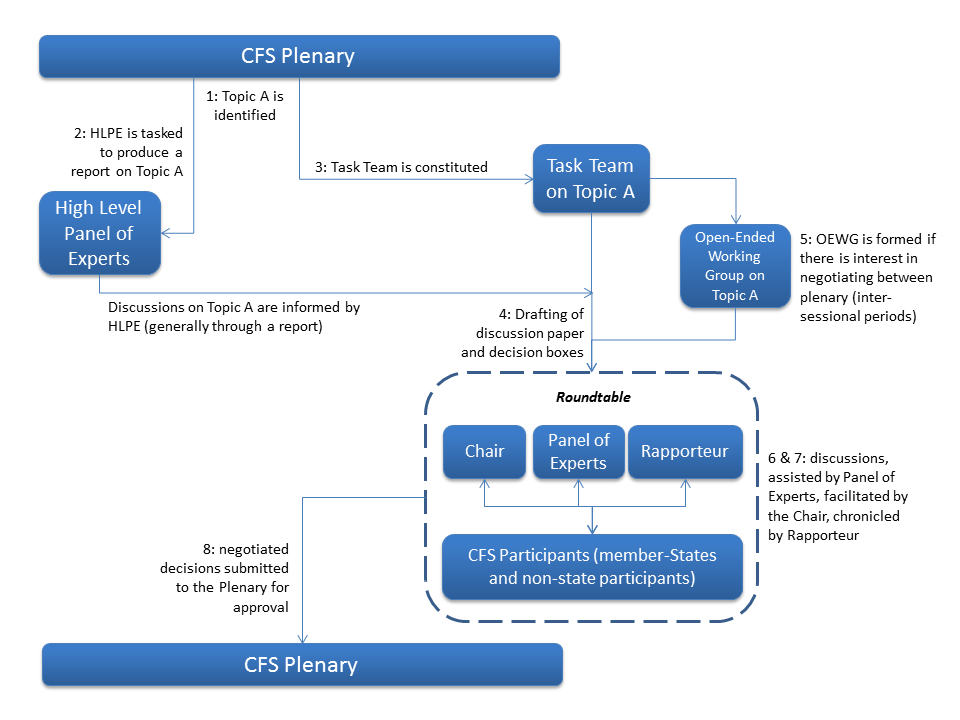 The CFS identifies a theme (step 1) and tasks the CFS’s independent High Level Panel of Experts (HLPE) to produce a related report with recommendations (step 2). In preparation for the roundtables, the CFS also forms Task Teams (step 3). These Task Teams draft discussion papers and compile “decision boxes” informed by the report of the HLPE (step 4). Decision boxes (sets of actionable policy recommendations) preface the discussion papers and form the starting point of the policy negotiations, although this year “Proposed draft recommendations on sustainable agricultural development for food security and nutrition, including the role of livestock” were issued as a separate document. Open-Ended Working Groups (OEWG) are formed where interested parties start negotiating the recommendations in the inter-sessional periods to prepare for the larger negotiations (step 5).

Each roundtable begins with a panel of experts, including experts identified by civil society and private sector actors (step 6). These experts provide context from multiple scientific perspectives to help frame the negotiations. Still, the negotiations are facilitated by a Chair (a country delegate) and chronicled by a Rapporteur (these are usually volunteers from country delegations or experts in the area), and a scribe. The Rapporteur is responsible for identifying key outcomes, points of agreement and advancing recommendations. As noted above, the negotiations start from the text included in the decision boxes, or the draft recommendation.

Member states and participants identify themselves to the Chair and then the Chair calls on them to make interventions in the order they are seen (step 7). It is not uncommon to hear the Chair say “Civil Society Mechanism please, to be followed by Canada, and then the World Bank” illustrating not only a fundamental change in the way the CFS operates, but also in the ordering of intergovernmental negotiations.

The text being negotiated is projected onto a large screen. Scribe make use of Microsoft Word track changes to note the contributions and changes.

The Chair works with the members and participants to come to consensus. With consensus on the text, a roundtable is concluded and the negotiated decisions submitted to the Plenary for approval (step 8).

The important change is that this year, there were no side negotiations during the Annual Session. The negotiations took place in the Open-Ended Working Groups and were completed in advance so that the CFS plenary only needed to approve them.

So let us turn now to the tradeoffs we see with this change in CFS procedure. Let’s consider three potential limitations, then turn to opportunities (although these are, as you will read, not clear cut categories).

Besides simply changing the negotiation dynamics, shifts in decision-making processes have implications for how member-states representatives understand interactions with non-state actors, as each year, new people come to the CFS. These people may not be aware of the CFS processes. The opportunity to engage in the policy roundtables presents in some ways a “crash course” in the inclusive and deliberative methods employed by the CFS to arrive at decisions.

This can be a very frustrating process (especially, for who are not used to being challenged by non-state actors), but we have also seen that many of those who experience this approach come to see the value of it. We have interviewed and witnessed several higher-level diplomats express deep frustration at their first CFS event, only to become proponents of the CFS and its participatory approach in a later stage once they saw the benefits of greater interaction.

From interviews and discussions we had at the CFS, we noted that some participants appreciated the time that was freed up by not having to be preparing for negotiations during the Annual Session. They noted that this provided more opportunities to network, strategize and organize.

We have here focused on questions related to process, with little regard for content. Much more time and care is required to be able to make claims as to the implications of this approach for policy outcomes. You can however judge the results of the negotiations yourself by reading the final report of the 43rd Session, available here.

The Civil Society Mechanism also has an archive of the policy negotiation processes:

We would be most interested to hear your thoughts: What are the opportunities, benefits and risks associated with having the policy recommendations negotiated entirely in the inter-sessional period?