What mechanisms to push such powerful players to change for transformative impact?

We continue with our second post of  ur third the thematic cluster: “CFS: Multi-stakeholder or multi-actor? And does it matter?”  In this post, Pierre-Marie reflects on the rise of “multistakeholderism”in the CFS, and more broadly across food security and nutrition governance. He concludes with reflecting on ways to reinforce governance framework to ensure more appropriate participation in multistakeholder mechanisms for food security and nutrition.

This blog series is not an exclusive project. If you would like to participate, please let us know: foodsecuresolutions@gmail.com 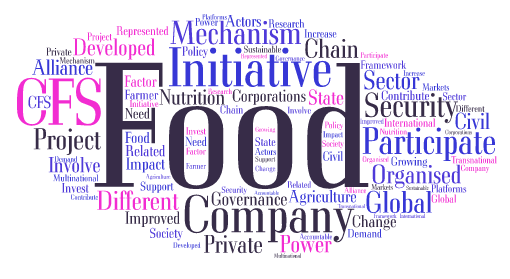 If you participated to CFS 43, you must have noticed the strong participation of private sector representatives. Around 150 of them were there, representing companies from all over the world and from all segments of food chains: agro-chemical companies, seed companies, traders, food processors, retailers, investors…

The 2009 reform of the CFS supported the creation of two mechanisms to facilitate the participation of non-state actors in debates (but without voting power): the civil society mechanism, for civil society organization and social movements more broadly; and the private sector mechanism. While civil society organisations immediately seized the opportunity and massively participated in the CFS, the number of companies represented at the CFS has been slowly increasing year after year, from less that 30 in 2010 to a bit less than 150 in 2016.

All of them involve companies from different segments of food chains, along with States, international organisations, research organisations and non governmental organisations. More than 60 companies are involved in at least two of those initiatives, most of them being large and often transnational corporations. Hence, and although the term “private sector” encompasses a broad range of actors ranging from multinational companies to small and medium enterprises or even certain farmers (who for example feel more comfortable to participate in the CFS through the private sector mechanism than through the civil society mechanism), one can not ignore the fact that multinational corporations from upstream and downstream parts of food chains play a prominent role in most global governance mechanisms for food security.

Just to give an example, out of the 12 multistakeholder platforms related to food security we looked at, major transnational companies such as Unilever, Cargill, Yara, Monsanto, Pepsi, were involved in half of them or even more. So the question is: what drives those companies to participate in such mechanisms? What can be expected from their contribution?

In terms of participation, three main factors can be identified. A first is common to all development issues and relates to the growing demand expressed by States and international organisations towards private companies. Sustainable development is indeed deemed to necessitate more investments that the public sector itself is no longer able to supply, hence the need to increase the support from the private sector.

A second factor relates to the need for most companies to raise their sustainability profile in the face of growing public / societal demand.

A third factor has often to do with the company’s business model and takes different forms depending on the type of initiatives we are talking about. In a political space like the CFS, one of the issue for companies is to make sure that what will come out from intergovernmental negotiations will be compatible — or even favourable — with their business operations. In project-oriented initiatives, like the Global Alliance for improved nutrition (GAIN) or the Amsterdam initiative against malnutrition, the question is more about identifying new markets / customers through different kind of projects.

GAIN is an organization that mobilizes public-private partnerships to address malnutrition.

Given this context, what can we expect from this increased contribution of transnational corporations? A closer look at the projects developed under in those different initiatives allows to distinguish between four types of interventions: intensifying agriculture practices upstream by improving access to inputs (chemicals, fertilizers, improved seeds); generating more cash from agriculture by improving farmers’ access to (international) commodity markets; developing the demand and the availability of bio-fortified products downstream by working with marketers, food processors and retailers; and changing policy frameworks at all levels to favour the adoption of the three above mentioned types of actions.

All of those can be grouped under a similar heading, that of “agri-food chain modernisation”, which reflects to a great extent the agenda of most companies involved. One of the key reason behind that situation is that many companies are not willing to embark in initiatives that are not aligned with their own objectives, as reflected — for example — in their CSR policy. Since, on the other hand, the bearers of food security initiatives are keen on having “big players” on board, they tend to align the initiatives’ objectives and projects to what companies have already planned to do.

However, the project of “agri-food chain modernisation” has often been criticized by peasant organisations, social movements but also researchers for its many negative impacts on the ground. Yet, those groups are often under-represented in the different initiatives we talked about — apart from the CFS. This results either from their own lack of willingness to take part in those initiatives — often in the name of lack of accountability mechanisms (see here and there), or from the fact that they were not necessarily invited, or from a lack of resources (human, financial) needed to contribute to such initiatives.

Hence, while big corporations are indeed in a position to contribute to food security thanks to their great investment capacity, but also their position in most food chains, this is not likely to happen without certain changes. One concerns the kind of projects they want to invest in and the agricultural models they want to support. Such evolutions or innovations will however not be favoured by most multi-stakeholder platforms if they stay as they are. An other important change would thus be to reinforce their governance framework, in at least two different ways.

One is to recognize the fundamental differential of power that characterizes the different participants to such initiative. When the net profit of a company is worth the double of a country’s GDP, not to speak about the annual budget of a small farmer organisation, those power asymmetries can not be ignored and must be considered in the way in which discussions are organised and decisions taken.

Second is to endow such platforms with a stronger accountability framework, which involves the following key elements: the definition of a referential framework, which is to enable the assessment, ex-ante, in itinere and ex-post, of the potential and actual impacts of a measure or a project; and the creation of a reporting mechanism thanks to which those impacts can be attributable to actors who can, in turn, be held accountable.

Pierre-Marie Aubert is a research fellow in Food and Agricultural Policies at the Institute for sustainable development and international relations (Paris). Visit http://www.iddri.org/Iddri/Equipe/Aubert for more information!