Is there space for innovation (and technology) in the CFS?

This entry is part of a special series of blog posts about the UN’s Committee on World Food Security (CFS): The Future of the CFS? Collectively reflecting on the directions of UN’s most inclusive body. Read more about this project here. Today we continue with our fourth thematic cluster: “Emerging Issues at the CFS: How are they being addressed?”.  In this post, Allison Loconto reflects on the politics of knowledge and techniques within in the CFS and in turn, how these contribute to food security.She acknowledges that frank debate about innovation and technology for sustainable agriculture and food security are not yet high on the CFS agenda, but that the CFS could become a mechanism to provide guidance on these questions as the global community begins to tackle them. This is not an exclusive project. If you would like to participate, please let us know: foodsecuresolutions@gmail.com 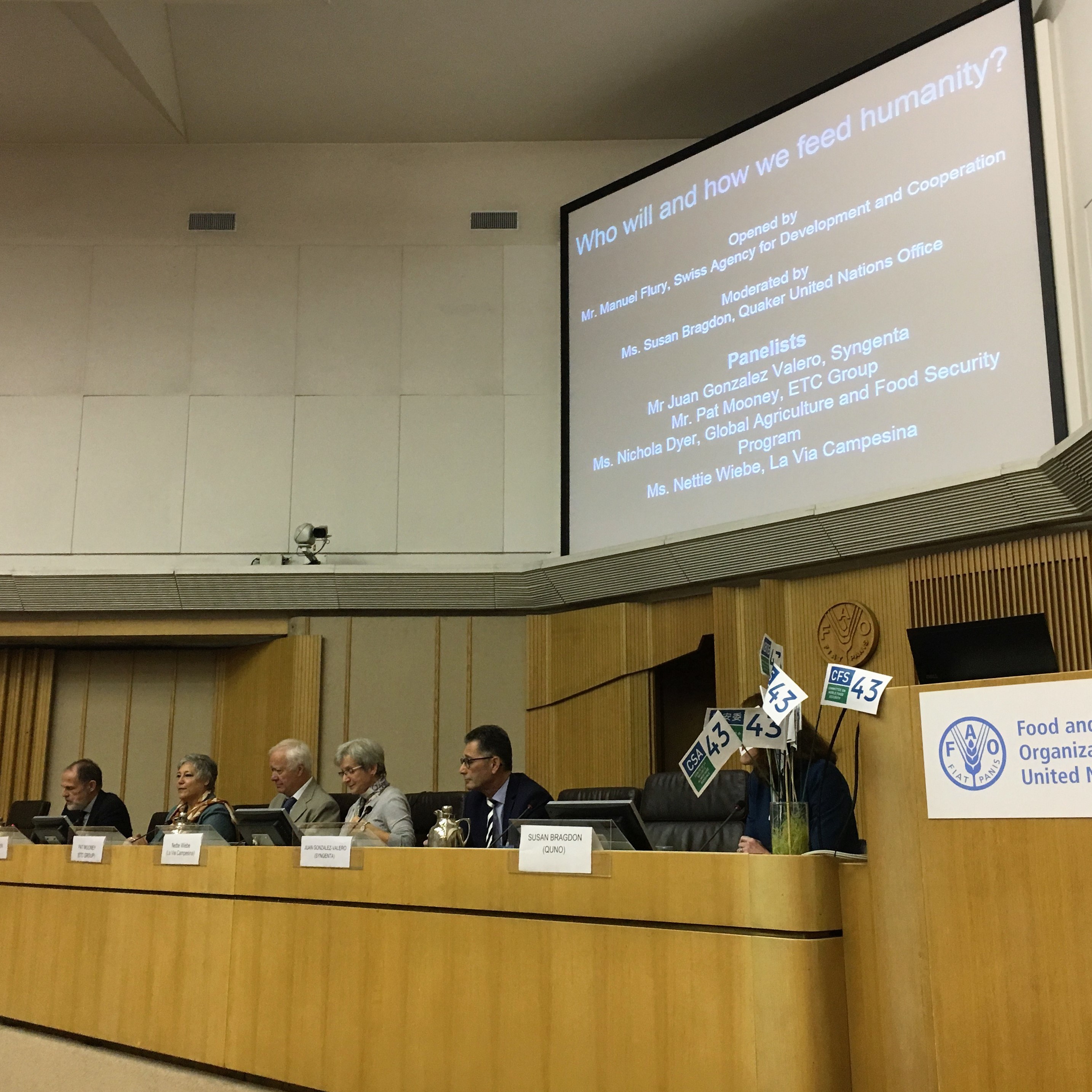 Each of us attending the 43rd session of the Committee on World Food Security (CFS) this year came to the meetings with a different learning/research objective. For me, this year, I was interested in following a topic that was not a clear priority for the negotiations, but nonetheless kept popping up throughout the discussions: technology and innovation. For someone who is quite interested in how knowledge about techniques (another way of thinking about technology) circulates, the 43rd CFS offered an interesting arena for understanding how politics around knowledge and techniques are contributing to broader questions of food security. Throughout the week, technology could be found as a silent undercurrent that upholds specific positions in the political debates around trade and agricultural policy. For example, the strong anti-GMO position taken by civil society within the organic and agroecology movements is often countered by a strong private sector call for ‘science’ and public sector promotion of ‘productivism’ where the sole objective and value of agriculture for food security is reducing the yield gap. The latter position is part and parcel of the conventional wisdom about the need to modernize agriculture. In the opening plenary session, the representative from South Sudan summed up this position saying: “We need to inject technology and information into our systems”, the representative from Nigeria likewise stated that their cows are only producing 1 litre of milk per day and “the will of the people is to increase their production – but the challenges are so deep they cannot [access technology]”,  while the Chinese representative stated very clearly that they are strongly committed to linking together agricultural modernization, industrialization and information technology. This idea that technology and information can be injected like medicine into the arm of a sick patient and will solve systemic problems of food security and development both ignores processes of innovation that can explain how technology becomes useful (and thus widely used) and how information must be turned into different forms of knowledge that are actionable (Gorman, 2002). There is an assumed linear path for innovation that begins with invention, follows through technology and product development and design, and ends with commercialization. Following this logic, individual scientists and companies invent (the latest EU Industrial R&D Investment Scoreboard figures show the more than 50% of R&D spending in the Agriculture and Food sectors come from private investment), with state investment through R&D funding (and protection of patent registration). The private sector commercializes and develops products. The public sector distributes the benefits to all people (to prevent poverty), extension diffuses the new technologies and more broadly, the State manages environmental and social impacts of technology and innovation. Here, civil society is a watchdog that calls out bad technologies or bad practices while the majority of the people are consumers, producers, employees and voters (but not innovators). However, there is significant evidence of innovation as multi-actor networked paths, rather than linear paths. A number of scholars have differently named these phenomena where innovation has become a collective endeavor (Van de Ven, 1999), with inventors and users collaborating and sharing ideas and information. These have been referred to alternatively as user innovation (Von Hippel, 1976); co-inventor networks (Breschi and Malerba, 2005); open innovation (Chesbrough, 2003); open source (Raymond, 2001); participatory design (Schuler and Namioka, 1993); community innovation (van Oost et al., 2009); upstream engagement (Macnaghten et al., 2005); mid-stream modulation (Fisher et al., 2006); Constructive Technology Assessment (Rip et al., 1995); cooperative research (Kleinknecht and Reijnen, 1992); democratising innovation (von Hippel, 2005; Felt et al., 2007); responsible innovation (Guston, 2006); responsible research and innovation (Von Schomberg, 2013; Stilgoe et al.); social innovation (Stirling, 2008); and grassroots innovation (Smith and Seyfang, 2013). Therefore, “innovation is not simply a technology (or a technical object), it must be the reorganization of institutions, organizations, value chains, and businesses to enable actors to innovate on their own terms” (Felt et al., 2007). This means that innovation is not a new technology, but a new way of doing things. Thus, if innovation is a collective reorganization of systems, can we not also consider it to be innovative uses of old technologies, new combinations of traditional knowledge and techniques or perhaps the discontinuation of some technologies that have not become useful to many people? These alternative ideas about innovation were highlighted during the Quaker United Nations Office (QUNO) and the Swiss Agency for Development and Cooperation CFS side event entitled 'Who Will and How Will We Feed Humanity'. A panel of four speakers, representing the private sector (Syngenta), civil society (ETC Group) and farmers (Via Campesina) and a donor (GAFSP), tried to find complementarity between contrasting approaches to achieving food security and nutrition. The motivation for this side event was precisely that discussions around how to achieve food security and nutrition and the related SDG targets are often polarized, with core challenges being framed based on an ideology or perspective (such as modernization, or productivity). As we know from theories of the performativity (Callon, 2010), different framings can lead to different and sometimes contrasting approaches to solving them. This is one of the reasons why this panel discussion was so interesting. We got to confront face to face these different framings of a single (hypothetical) problem of constraints on food security in two countries.
Share on: