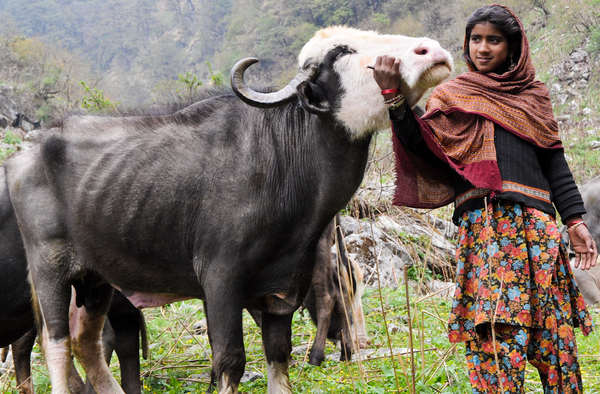 There is a new interactive story telling project and it is AWESOME.

It has just been launched by Traditional Cultures Project and I will let them tell the story, since that is what they do best:

The people of northern India’s Van Gujjar tribe are nomadic water buffalo herders whose lives revolve around caring and finding food for their animals. Winters are spent in the lowland wilderness of the Shivalik Hills, where the thick jungle foliage provides plenty of fodder – and plenty of isolation from the rest of the world. By April, however, temperatures soar above 110 degrees; leaves and grasses wither and die; creeks run dry. With nothing left for their buffaloes to eat or drink, the Van Gujjars must move. Entire families, from infants to the elderly, trek with their herds up into the Himalayas, where melting snows reveal lush alpine meadows laced by gurgling streams. When the cold sets in at the end of September, they head back down to the Shivaliks, where the jungle has sprung back to life following the monsoon rains. True nomads, they’ve followed this cycle of seasonal migration – shunning settled village life – for over a thousand years. But things are changing…

This project documents the Van Gujjars’ annual spring migration, following one family on their journey into the Himalayas. Their story vividly illustrates the Van Gujjars’ nomadic way of life — both its age-old essence as well as some of the modern challenges that threaten it. And it invites us into their forest-world in a very personal way.

The present the journey in two formats:

The 3-D map version allows you to travel virtually along the migration route, to get a sense of the terrain that the family is covering.

2 thoughts on “The Van Gujjar Project: Migrate through the Himalayas”